Moderate Winds, and Not Too Gusty—Perfect!

Today's outing combined a number of family-orientated things, but this report will stick strictly to the flying of the 1-Skewer Dopero kite, of course! Being a tiny kite, is was entirely practical to launch it right there in the gravel car-parking area. 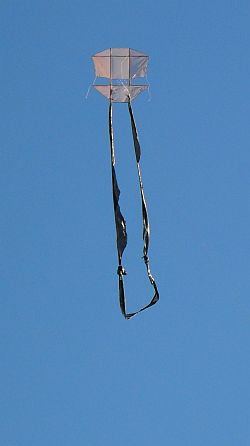 The previous half an hour or so had seen the very light breeze freshen considerably, up into the moderate range. That suits my 1-skewer kites, which have quite a bit of bamboo compared to their tiny amounts of sail area.

The little dopero shot up willingly on the end of just a few meters of line, its long tail loop of black plastic keeping it pointed upwind most of the time. I had fiddled with the bridle and sail tethers quite a bit on the previous outing, several months ago, to get the kite to fly well. So there were no problems today!

With about 15 meters (50 feet) of 20-pound Dacron line out, we started taking photos. Some featured 5-year-old Aren holding the line.

By chance, the conditions were very good for getting imagery of the kite. The easterly breeze allowed the kite to get illuminated from behind by the sun, which was low in the sky to the northwest.

Soon I decided to move upwind, taking us out of the gravel patch and onto the grassy reserve. With the breeze traveling a long way across flat grassy ground, it was quite smooth, although still varying a little in strength.

It was easy to continue letting out line until the 30 meter (100 feet) flag came off the winder. At that point I stopped, knowing from previous flights that this kite would fly best on this length. When the wind strength was just right, the dopero would sit at around 50 degrees of angle from the horizontal. That was quite respectable, considering the 20-pound line is relatively heavy for such a tiny kite.

Just to illustrate the very light forces involved, this kite will fly happily in a moderate breeze with the winder, a 28 cm (11 in.) slab of wood, just sitting there on the grass—not secured or held down in any way!

Despite the perfect conditions, the 1-Skewer Dopero did misbehave just a little, when affected by turbulence or extra-strong gusts. It did a large loop almost to ground level, before recovering and soaring back up again.

Another time, the kite managed to flip itself inverted and sat there at about 50 feet off the ground for a few seconds up side down. That was with the bridle lines passing over the leading edge! How's that for some weirdness of tiny kites.

Time was getting on, so I let my wife, May, take the line for a while, before starting back to the car park. I wound on flying line as we went. Finally, the little dopero hovered and dipped just a meter or two off the grass, teasing Aren, who tried to catch it like a cat after a bird.

All in all, it was an enjoyable flight with the most complex design of the 1-Skewer series!