Several very rainy days are approaching, so the new 1-Skewer Diamond kite was pulled out while the sun shone. Kites actually, since I had made two of them. "Made to be trained" they are, with one bridle leg out the front and one out the back, for convenient hitching together with short flying lines. 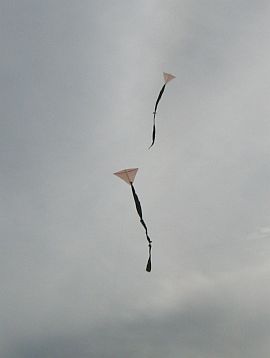 The weather conditions were quite unusual today.

Thin hazy mid-level cloud reduced the intensity of the sun, blocking it to what could be called half strength. Objects such as trees and poles still cast easily-seen shadows.

A wide halo had formed in the cloud cover around the sun. This was not a rainbow, but some other effect for which meteorologists have a name. I'd mention it if I could remember it.

Winds this afternoon were very variable. You could describe them as light gusting to fresh, with frequent shifts in direction. Hence the new 1-Skewer Diamond kite was either struggling to stay up, or being battered by too much wind speed for much of the time!

Gee, I've taken a while to get to the actual kite flying.

OK, the first diamond I made went up first. Let's call it Number One. Moderate gusts were blowing through constantly as I attached the flying line, so the little diamond soared up almost immediately. It was too easy to let out about 20 meters of line, before stepping on the line and fishing out the digital camera from a coat pocket.

I took some photos, then wasted no time letting out over 60 meters (200 feet) of line.

These little kites have correspondingly low line pull. Hence, even in these conditions, my wooden winder could just lie on the grass without shifting downwind. This enabled me to take some video footage from directly underneath the 1- Skewer Diamond kite. Coincidentally, some soaring birds got themselves in the picture too. They were checking out the kite from a much higher altitude!

The 1-Skewer Diamond kite coped well in the very gusty air, although the freshest gusts would force it down close to the ground from time to time. It was good seeing it up high for a change. Now, it was straight back to the car to pull out the Number Two kite and attach it to the back of Number One with a 10 meter (35 feet) length of line! This involved just two Lark's Head knots, a piece of cake.

It was fascinating to watch the interplay between the two kites as they swept around the sky.

Both diamonds responded immediately to shifts in wind direction. Somehow, the wind shifts were a lot more obvious when more than one kite was on the line! Imagine all eight 1-Skewer designs flying in a train, stretching up to 400 feet. It might happen one day.

Lulls would lead to both kites sinking low sometimes. At other times, very fresh gusts would put Number One into a dive toward the ground, dragging Number Two with it. And then Number Two would start to twirl around in loops, completely overpowered, while Number One hung on, maintaining its composure. And so on and so forth.

Maybe 20% of the time, wind strengths would be near the ideal for these kites. It was then very gratifyingly to watch them soar up to a 45 degree line angle in tandem, swaying and rocking just a little, as the long tails kept the noses pointed upwind.

With such small kites on nearly 90 meters (300 feet) of line, there was bound to be a little excitement from time to time. I'm talking about those trees lurking in wait around the reserve perimeter! Number Two had a near miss with one such tree. However, 1-Skewer Diamond kite Number One helped me to pull it free through some small twigs! Phew.

It's definitely more fun flying two kites on the one line like this. We'll have to do more of it! I can see most of the 1-Skewer kites lending themselves to this "Ready to train" approach, as I redesign them one by one.