In the warm and gusty conditions this afternoon, the new 1-Skewer Delta kite gamely flitted around in light-to-fresh winds. This is quite a wind range for the little delta to cope with. Small deltas don't have a huge wind-range, but they fly brilliantly when the wind speed is just right! 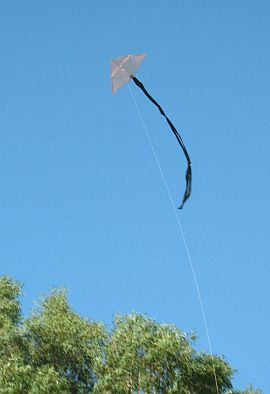 My small son Aren and I were down at the nearby reserve, not far from our house.

I'd been planning to improve the original 1-Skewer Delta kite for quite some time. Hence, today it would be interesting to see how the extra sail area and floating spreader helped the new design.

On the minus side, I was using slightly heavier plastic for the sail and tail.

Also, the bamboo skewers used this time were thicker and heavier than the original ones. It seems not all brands of bamboo BBQ skewers are machined to the same diameter.

So, to begin with there were a few short flights on 15 to 20 meters of 20-pound line. The little delta struggled in the fresher gusts, which often forced it to the ground. A lone white cockatoo flew past, upwind, and didn't appear to take much interest.

The delta sometimes sank to the ground during the lulls, before rocketing up high, trailing edge fluttering. Not that you could see any flutter, but the sound was a giveaway!

When the wind speed was just enough to suspend the kite several meters off the ground, its stalled wingtips would waggle like a diamond kite. Just the slightest increase in wind speed would send the small orange delta smoothly upward from there.

Eventually I let out more line and flew higher, dicing with danger in the form of leafy gum trees on the downwind side of the reserve! From time to time, the delta's shadow would flit across the waving leaves and small branches.

Aren, nearly 4 years old now, got busy on the nearby play equipment.

There was a close call when I slightly misjudged the distance to a tree and flew the kite into the side, behind a few small branches. Quickly pulling in line, the kite emerged from the upwind side of the tree, upright and still flying! Whew. That's too close, particularly with a kite you have only just completed!

The air was a little smoother up high, but still too strong for the kite much of the time. Hence the small delta was racing across the sky from side to side in protest. However, the kite never went very far before correcting and heading back toward center again.

The 1-Skewer Delta kite occasionally looped in both directions, so there seemed to be nothing much wrong with the trim. Perhaps it favored the right side a little more. This flying session was turning into a good workout for me, as I took in and let out line just to keep the delta in the air—not to mention dodging those downwind trees!

Small kites are always more work to fly, with their smaller wind range. It's good for the skills though!

A couple of times, a wind gust would coincide with a patch of rising air. This would result in a spectacular very fast climb from almost ground level to a 60 to 70 degree line angle. By this stage, I had nearly 100 meters (330 feet) of line out.

Finally, being late afternoon, the wind moderated a little and the delta started flying in its comfort zone. Beautiful. It just sat there, hunting slightly left or right every few seconds. After reeling more than half of the line in, the kite was still flying well.

It was time to give the winder to Aren and let him have a fly.

Overall, it was a pretty satisfying first outing for the redesigned 1-Skewer Delta kite. It seems that both the lower and  upper limits of the kite's wind range are somewhat higher than the original 1-Skewer Delta kite. Hence the new one is more of a moderate-wind flyer really.