The leaves outside were barely moving. Perhaps it was a day to try the latest 1-Skewer Delta kite again. The low end of the wind range for this particular kite hadn't been tested yet! 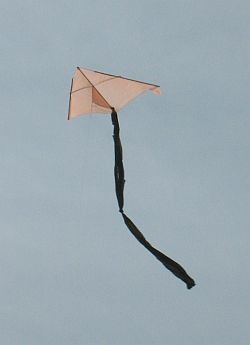 Despite the forecast for a hot maximum temperature, my son Aren and I got in the car and headed out for a nearby reserve. It was a day for full-on UV protection, with wide-brimmed hats and sunscreen.

There was a fair amount of smooth high-level cloud, plus a slight dust haze. Being just before midday, the temperature didn't seem too bad. Even the breeze wasn't warm, perhaps because it had crossed the gulf from the west.

A very light breeze was gusting to light as weak thermals came through. The kite's fresh-wind stability, or rather, lack of it, was not going to be a problem today! Hence it was decided to remove part of the tail, leaving just 2/3 of its original length in place.

As we often do, some low flying was done first, to get a few still photos. The kite ended up on the ground several times due to lack of wind. Because of this, it was necessary to let out about 20 meters of line to get video, using 4x zoom. For a few minutes when the wind strength just happened to be ideal, the tiny tailed delta flew like a much larger version—stable and very smooth. Even the tail hardly shifted.

When necessary, my 4-year-old kiting assistant, Aren, did a good job of running out and flipping the kite over so I could relaunch it from the grass!

Recently, I came across a rather descriptive kiting term for something I like to do from time to time—the float launch. I did one of these, using several gusts to float the delta out to about 60 meters or so, just 2 or 4 meters off the ground. Then, there was enough breeze to maintain a 40-degree angle while letting line slip slowly through my fingers.

With about 90 meters out, the 1-Skewer Delta kite went up nice and high for a while. Then, it encountered sinking air and a rapid keel-first descent followed!

Like other deltas, this one gets up a wing waggle when trying to fly in insufficient wind.

The outing turned into one of those marginal days when constant work was necessary to keep the kite in the air.

Most of the time, the delta was flying at low line-angles purely due to the low wind-speed. A lot of pulling-in during lulls and letting-out during gentle gusts made the most of the available wind.

The line draped across the grass at one point, with the little 1-Skewer Delta kite in a slow wing-waggling free-fall toward the grass.

At its highest points, the kite often got quite close to the position of the sun. In fact, an interesting thing happened when the kite got between the sun and a small flock of galahs sitting in a tree; they took off suddenly, perhaps believing they were being eyed off by a hawk!

I might as well mention now a coincidence that happens very occasionally. The shadow of the kite moved around just meters from Aren and I for a few moments, despite the long distance between the kite and us. I couldn't help calling the attention of my 4-year-old to this, of course. He seemed surprised. Never-the-less, he was now bugging me to take him across to the nearby play equipment.

Now to sum up: There was a lot of climbing and descending, with the size of the 1-Skewer Delta kite limiting how high it could go on its 20-pound line in such a light breeze. Still, it was a much better experience than yesterday, when we went out in extremely gusty fresh-wind conditions! Although the flying wasn't pretty, at least I managed to fine-tune the length of that little tail-let on one tip, to correct a turning tendency. This is my favorite trimming trick for little kites on simple bridles!