Arriving at our usual kite-flying reserve, it was clear that the 1-Skewer Box kite would get into the air without too much trouble. Or so I thought! It turned out to be a bit marginal after all, with the wind strength dying too soon after each gust lofted the kite a few meters into the air. 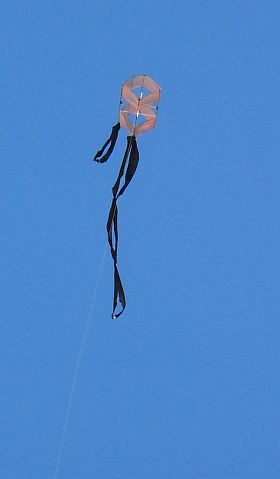 So began a whole number of short flights, not helped by the wind shadow created by the trees upwind.

So, I tried moving toward the middle of the reserve, where the moderate gusts coming through made things a bit easier. But still, there was no real success. Grr ... little kites can be a pain sometimes.

However, persistence breeds success! Finally, the light-orange 1-Skewer Box kite was up and away. It was flying more than a couple of tree heights up, in stronger and more consistent airflow. With 30 meters of line out, the time was right to pull out the Samsung digital camera and crank it up to 5x zoom.

Even just taking pictures of little kites is harder than for larger kites. Not just because of the size, but because it is harder to keep a small kite off the ground on a short line!

When the freshest gusts hit the kite it was clear that it was pulling to the right under stress. So I added a little more plastic to the tail-let on the left side. You can see the original tail-let in the photo over there.

A brief flight showed that still more was needed, so I added a complete extra loop to the tail-let. This turned out better, but at some wind speeds the kite would suddenly pull left! Perhaps just more length on the main tail would help. But the kite was flying OK most of the time and getting more altitude.

Eventually, with the average wind speed creeping up, the full potential of the tiny box kite was on show. Frustration started to give way to relaxation and good old kite-flying pleasure! You know what I mean—a tight line, sun on your face, and wind on your back.

Much of the time the kite sat at around 30 degrees but occasionally it was pushed higher by rising air. At other times, tail down, the kite hung lower and pulled hard. Or it tried to—at this size, no kite pulls "hard"!

By now the sun was shining brightly, the sky mainly blue with most of the morning cloud cover gone.

A small bird circled briefly below the kite to take a look, before flying off.

Speaking of birds, a lone magpie shot past below me, keeping close to the grass, some time earlier. A couple of white cockatoos flew silently by, several hundred feet up. They only seem to make a huge noise when moving in large groups!

Feeling some extra tension in the line, I was able to let it out to 60 meters (200 feet). The 1-Skewer Box kite seemed so small at this distance, and it started flying higher than it has ever gone before. It shuddered in thermal turbulence for just a moment, before soaring up in the rising air that was nearby. The boundary between rising and sinking air often contains a small region of rough air, and you can actually spot it happening sometimes, with a kite in the air.

The box kite was covering a lot of ground, sometimes being forced into slow loops to the right under strong wind pressure and just scooting left or right at other times. When sitting on top of a plume of rising air, the line drooped vertically down underneath the kite, before arcing back to where I was standing on a grassy mound.

Several times, the 1-Skewer Box kite ended up very low over the grass, but willingly climbed back up. Sometimes this was only with a little help from me, tugging the kite back up into faster air when it happened to be pointing in the right direction!

The wind strength was definitely increasing. Looking around, I saw that dozens of treetops were all showing some small branch movement. The closest ones were generating a fair amount of leaf noise in each long fresh gust.

And then a magic moment. A large thermal came through, and I let the line out to about 80 meters as the little orange kite climbed rapidly. It was just a speck way up there. The 1-Skewer Box kite floated on its face, the 20=pound Dacron line describing an enormous S-bend as various wind gusts tugged at it from different directions. At an angle of about 50 degrees, the kite was about 170 feet above the ground.

Soon after this, the kite sank nearly all the way to the grass, clearing the trees downwind by only a few meters. Some time later, after bringing in some line, the kite came to ground in the middle of the reserve.

I moved off to the side to collect the wind meter and equipment bag. Also, I went to pick up the winder and start putting line back on. Imagine my surprise when, halfway through winding, I looked up to see the 1 Skewer Box kite flying once again! The line had caught on a thistle, after a gust must have rolled the kite around and bounced it back into the air.

To get a better idea of the real wind strength, I put the Windtronic wind meter on the grassy mound for a few minutes. It came up with an average of 7.1 kph, gusting to over 15 kph. I'll bet it was closer to 25 kph at times, up where the kite was!

Anyway, it was a good outing—the best actually, with this particular 1-Skewer Series kite!