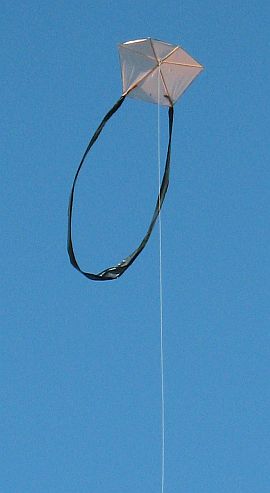 Down at the reserve, there was almost no breeze. There was mainly blue sky overhead, although a lot of thermal-marking cumulus clouds were visible in the far distance.

The UV danger was predicted to be at an extreme level today, so Aren and I both wore our Cancer Council hats with their great ear, neck, and nose protection. Those bits are the most likely to burn!

At least the ample sunlight today would be good for the image quality from our rather cheap digital camera.

The only significant wind coming through was associated with the occasional thermal lifting off. Hence, there were huge variations in wind direction. It was about 270 degrees actually, if I remember all the directions in which I towed the kite up or let out some line.

To begin with, it was only possible to loft the little 1-Skewer Barn Door kite for a few minutes at a time. If it didn't find rising air immediately, it would just drift down again, the wind speed insufficient to support it plus the weight of the line.

Although there was quite frequent thermal activity, the lift didn't seem particularly strong today.

Still, it was nice seeing the refined kite design basically behaving itself up there. With the light wind strength, the loop tail formed a fairly stable shape, the shape changing in subtle ways from second to second.

Occasionally, when the kite was floating down on its face, the tail would cross over into a rough figure-eight shape, but that was about it. In contrast, moderate-to-fresh winds tend to coil light plastic tails up and reduce their effectiveness!

After a while I did manage to get some fairly high flying out of the little orange barn door. However, if the wind speed dropped suddenly while the kite was at its highest point, it tended to tuck the leading edge under and dive all the way to the ground! Also, it once rolled onto its back and descended slowly, parachute-like. Somehow, this state was stable for many seconds at a time, despite the dihedral pointing down instead of up!

Hey, expect the unexpected with tiny kites; it's a different kind of fun to flying much larger ultra-predictable designs.

Of course, there were times when the line would tension up nicely as the wind strength picked up by a few knots. This would cause the 1-Skewer Barn Door kite to lean back and climb steadily up for a hundred feet or so—like any single-surface kite on a simple bridle.

With more than 30 meters (100 feet) of 20-pound line out, there was considerable sag. The kite was flying at well under 45 degrees, unless pushed up with a little rising air! Talking about rising and descending air...

Since the 1-Skewer Barn Door kite was nearly always in the vicinity of a thermal, it was hard to tell exactly what line angles the kite would achieve in cold smooth air. I suspect 40 to 45 degrees, but no more than 50, even on a short line. So, the small barn door is a modest performer with its tail limiting its flying angle. But it's something different to an ordinary old diamond isn't it! It's sure to get a few curious looks from people passing by.

The 1-Skewer Barn Door kite kept me so busy trying to keep it in the air, that I didn't take much notice of the birds that flew through today. I do recall a lone white cockatoo flapping its way across the field and several flocks of birds in the distance. Let's call them Unidentified Feathered Objects.

This barn door is a great little kite, although somewhat more fickle in flight than the 1-Skewer Diamond. As with the diamond, a reasonably smooth light wind would allow you to train eight or more of these together on a 30-pound line. That would make quite a spectacle!

Here's another idea: Train both types of kites, perhaps alternating between barn door and diamond. For this many kites, a 5-meter line between each one might be about right. You have to give those tails some room!