How to Make a
Paper Delta Kite

Get the E-book Here!

The instructions which show you how to make a paper delta kite are step-by-step and illustrated throughout by high-quality closeup photographs. But first, let me tell you a few things about this very cheap-to-make kite... 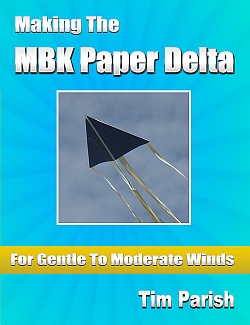 Here's the button, for secure purchases with a credit card or PayPal:

Almost Too Much Wind!

To give you some idea of how this kite flies, here's an excerpt from a flight report done after a trip to a large open field:

"... Well, the sun was out today, but the breeze was easterly. That would be no good at the beach. A little accident with the thread and it would be goodbye kite—into the waves! And unflyable weather was on the way for the rest of the week, so it was now or never.

It was decided to try a large grassy area adjacent to a large shopping complex. There were trees surrounding the field, but they weren't too high.

Just before leaving home, a very nearby weather station was reporting 16 kph with a gust to 22 kph. Perfect! The day was warming up though, and thermals were beginning to develop.

Predictably, being inland, several attempts to fly on a short line resulted in fairly short flights. They were less than 30 seconds each, most probably. This was despite moving to the middle of the field to escape wind shadow from the trees. But plenty of photos were taken from various angles.

The next step was to let out more thread and get some higher-flying shots. At the same time, I moved upwind to allow more space downwind in case the thread broke. You can't be too careful in that respect; I've lost a couple of paper-kite prototypes that way!

The bridle setting seemed to be keeping the kite a little low. So I shortened the rear bridle line by tying a tiny loop knot into it and tried again. Maybe it was a smidge too far back, but the little black delta certainly went higher than before.

The strongest gusts were now causing some distortion in the kite frame and a fair amount of looping around. But everything held. Some video was taken, and then some more, after I had brought the delta down much lower.

On arriving home I checked the weather station again. It had been blowing 22 kph with a gust to 26 kph around the time I left the field. So, the black Paper Delta had flown through pretty much the whole of its designed wind range."

From the summary up there, you already know a bit about a typical MBK Paper Series kite. But also:

Knowing how to make a paper delta kite is just a few minutes away now. You could have it in the air before the sun goes down. OK, maybe by lunch time tomorrow :-)  You'll find it's a really fun little kite. To make and to fly.

Here's the button for secure purchases via credit card or Paypal:

Back to top of page